Real Madrid striker Karim Benzema is determined to end his goalscoring drought for the France national team against Australia this weekend. 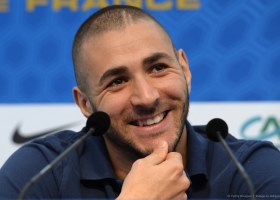 The 25 year old has not scored for Les Bleus in 15 outings but is calm about his current plight ahead of Friday’s clash with the Socceroos in Paris.

“It’s a bit more difficult than in previous years. It’s all part of the career of a footballer,” he said.

“I have to keep working. I want to score and to be better.

“You go through these times. It happens that this is the longest of my young career. It’s not going to last for another 10 years, I think that it will soon be over. I mustn’t let myself get down. I must keep working hard and not let my head get polluted.

“I’m having chances, so it’s up to me to convert them into goals.”