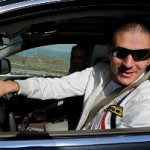 Real Madrid striker Karim Benzema has been involved in a new car accident.

A few weeks ago, Benzema suffered a car accident in Madrid, and now during his winter break he was involved in another minor mishap on Reunion Island.

It was reported that the accident took place after birthday celebrations with rapper Rohff.

It was reported that the French international striker emerged from the accident unscathed.