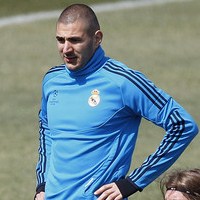 It has been revealed that Real Madrid star Karim Benzema has kept the door ajar for a future move to Manchester United.

The French international striker admits United have been chasing him for the past four years.

He told The Sun: “I would never say never about coming to England and, to be honest, I have no real preference in terms of teams. But that is a long way in the future, not something I would even consider at the moment.”