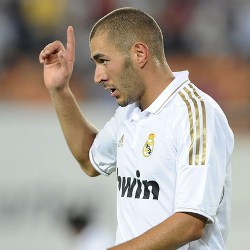 The France international striker has been the subject of speculation surrounding a potential shift to North London.

However the former Lyon star has revealed that there has been no contact from Gunners boss Arsene Wenger indicating a move is not on the agenda.

Benzema told L’Equipe : “My place is at this club,”.

“I have never talked to Mr Wenger or anyone else.

“I want to enjoy success here. I have found my self-belief. This season, I know we will win titles.”