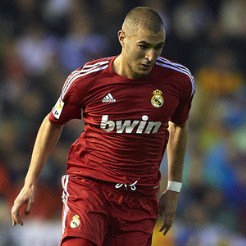 Karim Benzema has been named the French player of the year by France Football magazine on Tuesday.

Real Madrid striker won 155 points in a vote of former winners of the award, beating Barcelona fullback Eric Abidal (110) and Lyon keeper Hugo Lloris (69), who finished third for the third year in succession.

The French international striker, who scored the quickest goal (23 seconds) in a Real Madrid v Barcelona Clasico in his team’s 3-1 defeat last Saturday, has been in impressive form this year as he finally made his mark at the Bernabeu.

“I had the chance to be with a very good coach, Jose Mourinho. He put me back on the right path,” the 23-year-old told France Football.

Rudi Garcia was named French coach of the year for leading Lille to their first French title since 1954, with the club’s Belgian midfielder Eden Hazard being awarded the best foreign player prize.

Lille were named team of the year.