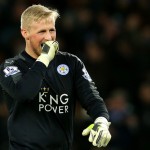 Reports are out claiming that Leicester City goalkeeper Kasper Schmeichel insists there’s no obsession about the title inside the locker room.

Despite intense celebrations after Sunday’s win over Southampton, Schmeichel says they are not thinking of the title.

The Denmark international said: “Maybe it’s difficult for others not to think about the title, but not for us.

“Granted it was in another league but we’ve done this in the Championship.

“A lot of us were there and we know what it’s like. It is a different level this time but it’s the same type of thing.

“If we start looking ahead, we’re not going to put our full focus on Sunderland on Sunday, which we need to do.”