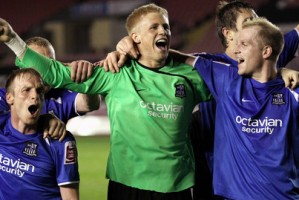 The 23-year old Danish shot-stopper joined the club in August last year, signing a five-year deal, but will leave on a free transfer at the end of the season as Notts County believe it would be too great a risk holding out for a transfer fee.

Schmeichel said he was happy with how he went this season with the Magpies but was looking forward to a new challenge.

“I have had a terrific season at Notts and thoroughly enjoyed every moment and I’ll be first in the queue for the end-of-season DVD,” he told the club’s official website.

“It is flattering to be linked with other clubs in the press but so far no-one has made a bid for me so I’ll just have to wait and see.

“I came here at the start of the season and there were big plans but our focus was on gaining promotion, which we have done.

“With the new owners hopefully the club can continue to move forward. I am sad to be leaving and I’d like to thank all of the players, staff and in particular the fans who have been fantastic all season.”