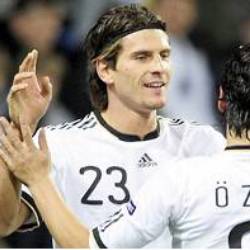 Germany extended their 100% record in Euro 2012 qualifying Group A to four games with three unanswered goals in the second half at Kazakhstan’s Ortalyk Tsentralnyi Stadium.

The visitors were heavy favourites to despatch the minnows but with the match scoreless at half-time there will no doubt have been some nerves in the Germany ranks.

Miroslav Klose finally got his side on the scoresheet three minutes into the second half, while Mario Gomez and Lukas Podolski also found the target to give a more comfortable look to the scoreline.