It has been revealed that Wayne Rooney has admitted he faces a challenge to maintain his place as England’s first choice striker for the foreseeable future. 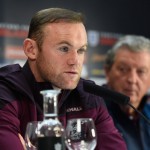 Speaking ahead of the Three Lions’ friendly match against Spain on Friday, for which Rooney will be rested, the former Everton man said it is a ‘huge challenge’ to lock down a place in Roy Hodgson’s squad given the level of talent at the England manager’s disposal.

Rooney said: “It’s a huge challenge to keep your place in the team and that’s what I want to do – I want to prove myself.”

“It’s the best group of strikers certainly since I’ve been involved in the squad. You’ve got players like Danny Welbeck, Daniel Sturridge and Theo Walcott out injured and it’s a huge array of talent and it’s great for the country.

“In previous years we’ve gone into tournaments and haven’t had that many match-winners in the squad. Now we’ve got quite a few match-winners which can benefit us as a team.

“There has always been competition. As a footballer you want to play, but then obviously you have to understand I have played a lot of games for England and players like Jamie Vardy have come in and done well.” Luis Fabiano : I Have No Intention Of Quitting Brazil!