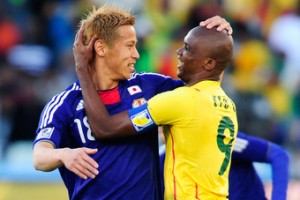 Honda who plays for Russian club CSKA Moscow gave The Blue Samurai the lead in the 39th minute when he found space at the back post after Daisuke Matsui’s cross evaded a host of Cameroonian defenders and he was able to control the ball and the stab home to give his side the lead.

Although 24-year old Honda was delighted to have gave Japan the win, he was quick to heap praise on his teammates, especially for their defensive effort late in the piece when their African opponents pushed hard for a leveller.

Honda said in an interview : “I had to stay calm when the ball came to me as we have missed chances in recent games,”.

The striker added : “It is not just about me, however, we defended well. Our team has not had good results but we got it right when it mattered.”