It has been reported that Kenneth Omeruo has signed a new contract with Chelsea. 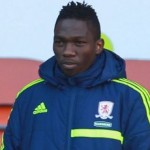 The Nigerian international centre-back has penned a contract extension which will keep him at Stamford Bridge until 2018.

The 20-year old is yet to make his debut for the Chelsea first team but has impressed on loan for Dutch club ADO Den Haag and Championship side Middlesbrough over the past few years.

“I’m thrilled to sign a new contract with Chelsea and am really excited about the future,” he told the club’s official website.

“To play at such a fantastic club is a real honour for me and I’ll be working incredibly hard to be successful.

“I’ve thoroughly enjoyed my time in England so far and can’t wait to get going.”

Omeruo, who arrived at Chelsea from Standard Liege in 2012, has played 14 times for Nigeria and is currently in the preliminary squad for the World Cup.