Reports are out claiming that Crystal Palace striker Kevin Doyle felt they deserved something from defeat at Manchester United. 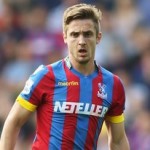 Doyle, who came on late in search of an equaliser following Juan Mata’s strike on 67 minutes, believes United didn’t test Julian Speroni too much either.

“We were unlucky and we stuck to the gameplan,” he told the Croydon Advertiser.

“There were one or two chances from us but we didn’t take them. United didn’t have many clear-cut chances and it’s taken a long range effort with a deflection. On the clear-cut chances, we had the better.