It has been reported that West Ham United captain Kevin Nolan says their new forwards have made the difference this season. 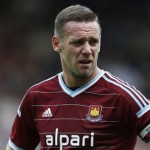 The Hammers go to Burnley this weekend.

Nolan said: “The difference between last season and this one is now we have forwards. Last year, because of injuries, it was difficult but the two lads we’ve brought in — Enner Valencia and Diafra Sakho — have adapted so well to the pace and power of the Premier League.

“Their work ethic is brilliant, they’re both good lads to have here — plus Carlton Cole, who is much fitter than this time last year, and Andy Carroll also coming back in the not too distant future.

“I don’t need a target man to play off. I’ve played in a variety of positions and last year, although it was a difficult season, I still scored seven important goals, which helped ensure we were safe.

“I know that, when I do get back, I will get chances because I have players to work off. I’m really looking forward to playing behind those two lads up front. I’m really confident I can contribute.”