It has been reported that Real Madrid goalkeeper Keylor Navas admits he and his wife waited to board a flight to Manchester on deadline day. 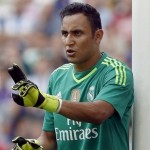 “My agent called me at 5 or 6pm and told me I was to go to Manchester.

“My manager was the one who was talking with everyone. He told me what I had to do.

“I knew at 7pm or something that I was to travel to Manchester.

“I went to Barajas and waited in a small room with my wife. But we never boarded the plane – as has been said.

“I never wanted to go.

“I never thought when I came to Madrid it would be for a year or two. I have my clear goals and have always fought for this trust in me. So it was a difficult situation but I never thought about leaving.” Manchester United To Open Talks With Valencia For Nicolas Otamendi