It has been reported that Kieran Gibbs is backing Arsenal teammate Theo Walcott fitter and stronger than ever before. 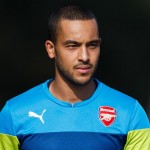 The England international ruptured the anterior cruciate ligament in his left knee during an FA Cup third-round victory over Tottenham in January.

“It is good to have Theo Walcott in the team, because he is such an important player for us. Theo coming back will give us a big boost,” said Gibbs, speaking on Sportlobster.

“It is difficult to get over an injury like his and it takes a lot of commitment and dedication, but he will be fitter and stronger than ever.”