Reports are out claiming that Kieran Gibbs is convinced Arsenal have the depth to challenge on three fronts. 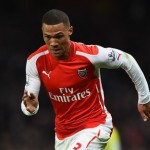 The Gunners are alive in the FA Cup and Champions League – and are battling for a top four finish.

Gibbs said: “It is probably the first time it has been like this for a while because normally we have something wrong with a player and while the team hasn’t picked itself, it has been easier [to pick the team] in the past.”