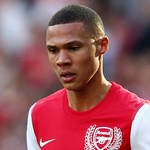 Kieran Gibbs has admitted that he is desperate to make up for lost time.

Injuries have held Gibbs back this season and he is determined to finish the campaign on a high for the good of his club – and hopefully his country.

Gibbs told arsenal.com : “I have been out for a substantial amount of the season, so I would need to finish strongly and remain injury free,”.

“At the minute, I don’t really think about England because Arsenal have so much to look forward to in the season.

“I would like to finish that strongly and then think about England afterwards.”