It has been revealed that Kieran Gibbs is excited about Arsenal’s title chances. 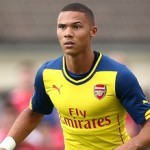 The 24 year old England international fullback has welcomed the additions of Mathieu Debuchy and Alexis Sanchez.

“It’s going to be an interesting year. We were top of the league for two thirds or half of the season last year – but it doesn’t help when you lose key players at key stages of the season.

“I think there were other factors but that definitely played a part. But we’ve kept the squad together and added more signings.

‘”It’s exciting times, we all want to be part of it. We want to stay fit and do well for the club. I think we’ve got a chance.

“I think there is greater expectation after the cup win, but we put that pressure on ourselves.

“The feeling of winning the cup is something we want more of. It’s positive added pressure we are going to put on ourselves.”