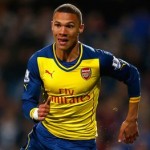 Reports are out claiming that Arsenal fullback Kieran Gibbs has hailed Francis Coquelin’s influence on the team’s form turnaround.

The England international star says he would vote for Eden Hazard as Player of the Year but, while he claims Alexis Sanchez means they do not need him, it is Francis Coquelin who he feels has made the biggest difference in the second half of the campaign.

Gibbs said: “I just think he (Coquelin) has made such a big difference. I felt he was the player that we’ve needed at that time.

“He reads the game well, he covers a lot of ground and he just allows players to do what they can do best.”