It has been revealed that Kieran Gibbs is weighing up his future at Arsenal. 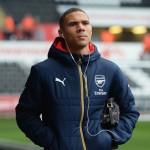 The Daily Star Sunday says the Gunners left-back, 26, has been assured game-time by Arsene Wenger ahead of the Euros this summer.

But despite Wenger’s promise, Gibbs is in danger of being left out the England squad.

He has started just two Premier League games all season and is behind Nacho Monreal in the Emirates pecking order.

A host of Premier League clubs including Swansea, Newcastle and Crystal Palace are monitoring his situation as they bid to strengthen their ranks.