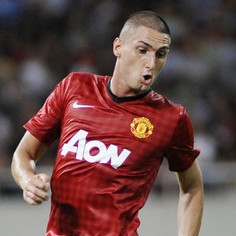 The agent of Manchester United striker Kiko Macheda has admitted that his agent could be on the move in January.

The former Italian Under-21 international returned to Old Trafford after unsuccessful loan spells at Sampdoria and QPR.

“How can he be decisive for the team if he never plays?” agent Giovanni Bia told ItaSportPress.

“Manchester United have some phenomenal players in attack, so it is truly difficult for Federico to find space. It’s not true what they write in the English papers that he’s going through a bad spell.

“He wants to play and if he cannot do so by January then we’ll try to find an alternative solution. I will talk to Sir Alex Ferguson over the next few days.

“Federico was requested by German and Spanish teams over the summer, but the English club preferred to keep hold of him.

“I hope they understand the situation and let him leave in January, because it makes no sense to keep a 21-year-old on the bench.”