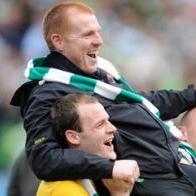 Celtic wrapped up the Scottish Premier League title in style with an emphatic 6-0 win over Kilmarnock at Rugby Park, handing Kilmarnock their heaviest-ever home defeat.

Four first-half goals signalled the visitors’ intent, who only needed a draw to clinch their fourth title in 10 years.

Charlie Mulgrew was the hero as he opened the scoring after seven minutes with a powerful header in the six-yard box from Ki Sung-Yeung’s corner.

Both sides started in a determined fashion, with the visitors keen to avoid a repeat performance of their shock Scottish Cup defeat to Kilmarnock earlier this month.