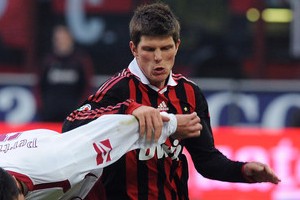 AC Milan striker Klaas-Jan Huntelaar will get the chance to strengthen his case over a move to Manchester United tomorrow night.

The Holland international striker, long admired by Sir Alex Ferguson, is ready to quit AC Milan in the summer unless he is handed a regular starting place by boss Leonardo.

Reports in Italy claim that Manchester United have renewed their interest in the 26-year-old, who has struggled since a summer move from Real Madrid.

Huntelaar told reporters that “I’m satisfied here, even if it is true that I wanted to leave in January because I wasn’t being used,”

‘I’m prepared to stay, but at this point I just want to play regularly. I don’t want to leave AC Milan without having shown that I deserve this jersey.”