It has been revealed that Liverpool are joining the battle for Borussia Monchengladbach midfielder Granit Xhaka. 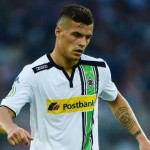 The Switzerland international has been linked with a January move to Arsenal.

It’s suggested Klopp has given the green light for Liverpool to offer €28 million for Xhaka in January.

The midfielder is tied to Gladbach until 2017 and his deal carries a buyout clause of €30 million.

Premier League club Arsenal are also said to be interested in the talented midfielder.