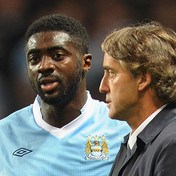 The Manchester City defender, back from his drugs ban, cleared off the line in Birmingham’s only threatening moment and earned an ovation at the end from a 25,070 Etihad crowd.

He told City’s website: “I just want to thank the boss for giving me the honour of being the captain tonight. The fans were behind me and I want to thank all the people who have supported me in a really hard time.

“I’m back doing what I love and I will enjoy it. I’ve been working really hard – I had only one week rest, because for me it was important to come back really strong. It’s been a nice night for me.”