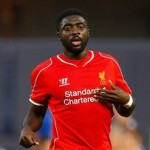 According to the Daily Mirror, Liverpool defender Kolo Toure is set to reject an offer from Turkish side Trabzonspor and stay at Anfield.

The 33-year-old former Arsenal and Manchester City defender had been heavily linked with a move away from Merseyside, but the Ivorian now looks set to stay after being told he has a future by Reds boss Brendan Rodgers.

“I am still at Liverpool,” Toure says.

“I had talks with the coach who clearly indicated that I was part of his plans. Trabzonspor are interested in me, but for the moment I am at Liverpool and I want to carry on with the club.”