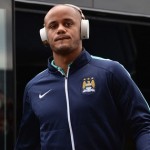 The gap between City and the continent’s best clubs was illustrated on during the defeat by Barcelona.

Kompany said: “The reality is they were a better team, there is no shame in admitting that. For me there is a big, big difference.

“I will just mention Bayern Munich and Barcelona, and then there are the rest of the teams, with Real Madrid probably in between.

“Ultimately we have always said our goal is to become as good as them, but it will take some time. They are really good.”