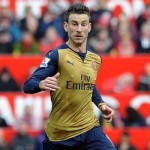 Banners calling on the manager to leave his post after nearly 20 years were unfurled in the aftermath of victories over Hull City and Everton, with Wenger admitting such open displays of defiance from fans “hurt” him.

“Arsene Wenger has been here a long time. I think he saw other banners, he is very calm, he knows what he brought to the club,” Koscielny said.

“I can understand the frustration of the fans, we gave ourselves a chance of winning this trophy. I think the coach is still the man of the situation. Mathematically everything is still possible.”