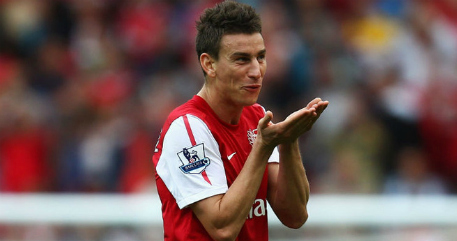 Arsenal have been dealt a blow with the news that central defender Laurent Koscielny will be out of action for at least three weeks.

The Frenchman was taken off just four minutes into the match against Everton last night and manager Arsene Wenger has confirmed that the defender has a badly strained groin. The news means Arsenal will be forced to re-shuffle their defensive shape as they head into a busy Christmas period.

Captain Thomas Vermaelen had settled at left back as full-back Santos is also injured, Vermaelen will now move back to centre-half with Kieran Gibbs likely to play at left back until Koscielny recovers. However, Arsenal fans hoping for a January defensive strengtheing shouldn’t get their hopes up – with Wenger adamant in recent weeks that Arsenal will not splash the cash, you’re not going to see new signings in Arsenal Prostar football kits before next summer.

“He has a groin strain. That’s usually three weeks. It was a game of big physical intensity, we had a good start and after that I felt Everton came back into it and their direct game was always a threat,” said Wenger after the match.

Arsenal sit in seventh place, just outside the Champions League places with one of the best defensive records in the league, they have conceded just 14 goals home and away.

The loss of such a key central defender could place extra strain over the fit centre backs at the club including Vermaelen and German centre back Per Mertesacker.

Wenger is now limited in terms of rotation and any complications to Koscielny’s groin problem will mean Vermaelen and Mertesacker playing throughout the Christmas and New Year period.

Arsenal have conceded eight Premier League goals through November which is well over half their accumulative total. This suggests that they needed to consolidate in defensive areas and the absence of Koscielny could prolong the recent leaking of vital goals.

Koscielny is a player with a big physical presence in the centre of the defence. He doesn’t get brushed off of the ball easily, he’s good in the air and good in possession as Arsenal work the ball out.

His absence could have a slight knock on effect in terms of how Arsenal play as both Vermaelen and Mertesacker are less effective when moving the ball out from the middle of the defence and through the midfield. Arsene Wenger Not Giving Up On Newcastle Midfielder Yohan Cabaye