Reports have emerged claiming that Chelsea boss Antonio Conte is in talks with the agent of Roma defender Kostas Manolas. 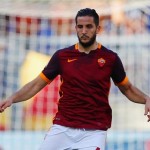 He is contracted until 2019 and Arsenal are understood to be keen on a move for him, says the Daily Express.

Conte’s top defensive target is Leonardo Bonucci, of Juventus, but he was injured against Germany and had to leave the pitch on a stretcher.

calcionews24.com report that Manolas’ agent met Conte on Wednesday in London to discuss a deal.