Reports are out claiming that Krystian Bielik is happy playing at centre-half for Arsenal U21. 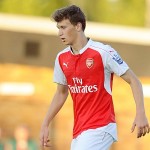 The Poland Under-17 international joined the Gunners in January after impressing during his first season of senior football for Legia Warsaw.

“The physicality was something new for me,” Bielik told Arsenal.com.

“I only started playing centre back this season and it’s the first time I’ve had to mark strikers who are running in behind.

“It’s also the first time that I’ve had to win headers. When I play in defensive midfield I don’t really have to run as much to mark players, so marking a striker at centre back is a lot more physical and has been a new experience for me.

“A lot of the time they ran behind me to go one-on-one with our goalkeeper, so that is definitely something that I need to improve on. We spoke a lot after the game and the coaches told me what I needed to do to improve and this has really helped me, and I think I really improved on that in the West Ham United game.”