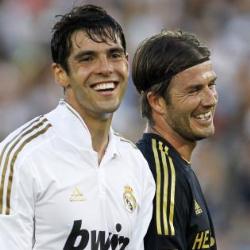 Real Madrid began their pre-season tour of the United States with a comfortable 4-1 victory over the Los Angeles Galaxy on Saturday night.

David Beckham wore the captain’s armband for the Major League Soccer side but was unable to prevent his former team running out convincing winners in front of a crowd of 56,211 at the LA Coliseum.

Jose Callejon opened the scoring for Jose Mourinho’s side on the half-hour mark and Joselu doubled their advantage six minutes before the break.

Half-time substitute Cristiano Ronaldo then added his name to the scoresheet in the 52nd minute with a fine individual effort before France international Karim Benzema made it 4-0 five minutes later.

However, Adam Cristman was on hand to head home a consolation goal for the Galaxy late on to cut the deficit to three.