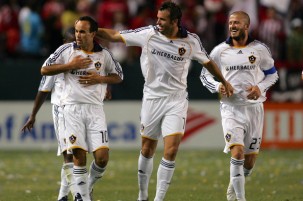 His Los Angeles Galaxy team were guilty of a series of defensive howlers in their two-leg battle with arch-rivals Chivas USA.

LA Galaxy were stunned after just three minutes when Brazilian Maicon Santos caught keeper Donovan Ricketts out with a low 25-yarder that crept into the far corner.

But the lead lasted just 11 minutes as US striker Mike Magee cashed in on a defensive error to equalise.

And Galaxy’s pressure finally told as another blunder just before half-time, this time by Santos, allowed Landon Donovan to toe-poke home.

The catalogue of defensive howlers continued after the break as Omar Gonzalez’s weak back-pass was snapped up by Cuban Maykel Galindo to make it 2-2.

Becks continued to provide openings for Galaxy but several chances went begging in a hectic finish – and the two teams will go at it again in next Sunday’s second leg.