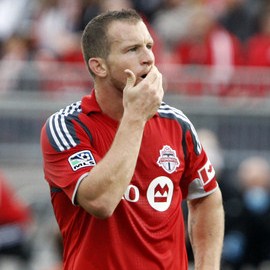 It has been revealed that the LA Galaxy have signed forward Chad Barrett from Toronto FC in exchange for future considerations.

A six-year MLS veteran who was raised in Southern California, Barrett has 34 career regular season goals in 147 games with the Chicago Fire and Toronto FC.

Barrett, who played his college soccer at UCLA, began his career with the Fire in 2005 after being selected by the club with the third pick in the first round of that year’s MLS SuperDraft.

Originally coached by current Galaxy Associate Head Coach Dave Sarachan when he joined the Fire, Barrett scored 18 goals in three-and-a-half years with the Fire including seven in 2007 when he finished as the club’s Golden Boot award winner.

David Beckham : Lionel Messi Is The Best In The World!