Life under Luis Enrique for Barcelona started with a win and a double for Lionel Messi as the Catalans won 3-0 over Elche in their opening Liga game. 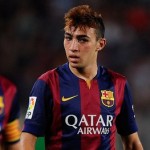 But it was 18-year-old Munir El Haddadi who stole the show, scoring on his competitive debut for the club having been handed a place in the line-up alongside fellow La Masia graduate Rafinha. New signings Claudio Bravo, Jeremy Mathieu and Ivan Rakitic also started for Barca.

Javier Mascherano was shown red just seconds after Barca claimed the lead at the end of the first half, bringing down Garry Rodrigues as he raced through on goal.

But last season’s league runners-up looked just as strong with 10 men as they had with 11, putting three points on the board ahead of Atletico Madrid and Real Madrid’s season openers on Monday night.