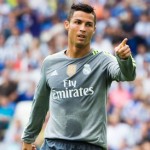 The Portuguese broke Raul’s mark of 228 with an extraordinary strike rate of more than a goal per game.

Real ran out 6-0 winners to take temporary leadership of La Liga ahead of Saturday night’s clash between Atletico Madrid and Barcelona.

Ronaldo scored a hat-trick inside the first 20 minutes. ending a two-match ‘goal drought’ to start the season.

Karim Benzema added a fourth before the break, before Ronaldo surpassed Raul with a simple tap-in from Gareth Bale’s low cross.