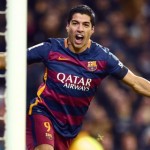 Luis Suarez produced a masterclass as Barcelona destroyed Real Madrid 4-0 at the Bernabeu in an unforgettable Clasico which leaves Barca six points clear at the top.

Real boss Rafa Benitez will be in fear for his job after a miserable evening for the home side, which never looked like going their way from the moment Suarez slotted home a stunning finish with the outside of his boot in the 11th minute.

Neymar added a second shortly before half-time, with Andres Iniesta’s unstoppable rocket into the top right corner making it 3-0 less than ten minutes into the second half.

Suarez then added a fourth goal with 16 minutes left to put the result beyond any doubt and give Barcelona the biggest win in a Clasico since the 5-0 thrashing Barcelona dished out against Real at Camp Nou in November 2010.

As if things couldn’t get any better for Barcelona, Lionel Messi returned to action from the bench looking in good touch after a lengthy injury lay-off, while Real had Isco sent off late on for a reckless late lunge on Neymar.