Real Madrid extended their lead over Barcelona at the top of La Liga with a 3-0 win over Espanyol, despite having Fabio Coentrao sent off. 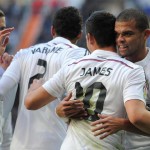 Having suffered defeat against Valencia last time out, Real looked to get back to winning ways against mid-table Espanyol and got off to the best possible start as James Rodriguez put the home side in front after just 12 minutes.

And they soon doubled their lead before the half-hour mark courtesy of Gareth Bale’s wicked free-kick from 25 yards.

Carlo Ancelotti’s men, who had recently seen their 22-match winning streak brought to an end, were dealt a blow less than ten minutes into the second half when Coentrao was shown a straight red card after colliding with Arbilla in a 50/50. The two came off looking in some discomfort and the match was suspended for a couple of minutes before the referee brandished the Portugal full-back a straight red.

With the numerical advantage in their favour, Espanyol pushed for a goal but were caught on the counter as substitute Nacho put the game to bed, rounding off a swift Real Madrid attack with a simple tap in at the far post.

The win sees Real Madrid move four points clear of Barcelona, with both teams now having played 17 games each.