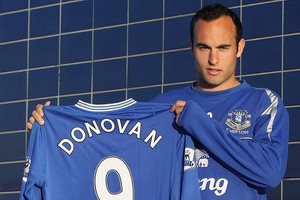 Landon Donovan has been named Everton’s Player of the Month for January.

The LA Galaxy striker, who is on loan with the English Premier League club, has enjoyed a solid start to his time at Goodison Park and has performed so well that Toffees fans voted him the best player for the month.

The 28-year old USA international has proved some doubters wrong with his performances in England’s top flight and in January he played five matches, scoring a goal and providing two assists and was delighted to receive such an award.

Donovan told reporters that it is a privilege to receive the recognition as it comes from the supporters.