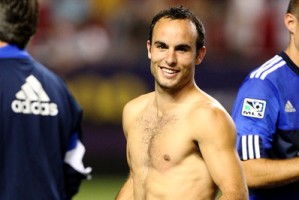 Everton loanee Landon Donovan has apologised to his teammates after his ‘miss of the season’ in the 2-1 loss to Tottenham on the weekend.

The 27-year old USA international shot wide of an open goal late in the match that would have given the Toffees a point at White Hart Lane and has since said sorry to his teammates for the unexplainable miss.

Donovan later told reporters that the miss is just a really disappointing moment for him personally.

Donovan added that he has put a lot into his time at Everton and another goal would have been a nice reward.

The US international said that he got himself in a good position at the back post and was hoping that Jack Rodwell was going to put the ball across goal and he did just that and it came perfectly for him.

Donovan then said that it is hard to understand what went wrong and that he felt like everything was right, but then he looked up to see the ball had hit the side netting.

Landon Donovan Miss Of The Season Video at 06:59