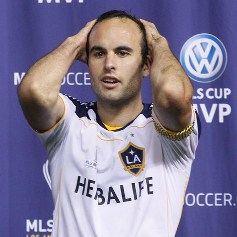 It has been revealed that LA Galaxy captain Landon Donovan will have his first training session with Everton tomorrow.

The American international is set to join on loan and the first match he will be eligible for is the home game against Bolton on 4 January.

He is not able to face West Brom on 1 January because the transfer window re-opens after the deadline for registrations for that round of games has closed.

Donovan agreed a two-month loan deal earlier this month, keeping him at Everton until after the Merseyside derby at Anfield on 25 February.