It has been reported that Landon Donovan is glad he is getting the chance to bow out of international football on a positive note. 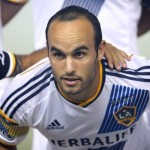 The 32-year old LA Galaxy star will make his final appearance for the USA national team in a friendly with Ecuador in Connecticut on Friday and he believes it will be a good opportunity to make up for his World Cup omission.

The USA’s all-time leading scorer was left out of Juergen Klinsmann’s squad for Brazil 2014 but is happy that he will now be able to say goodbye to the American faithful in what will be his 157th international appearance.

“This summer, obviously, was tough, not only for me, but for my family,” Donovan said at Galaxy training this week.

“… And you don’t want your last memory to be getting cut from the team, and my family didn’t either, so this will be a nice way to hopefully put a ribbon on my career. And I’m excited to have a chance to say goodbye to a lot of people who have been supportive of me.”

Regarding his controversial dumping from the World Cup, Donovan believes it has been a blessing in disguise at it has helped him rediscover his best form and lead the Galaxy to a possible third MLS Cup triumph in the last four seasons.

“I’m glad in a lot of ways [that I was cut],” added Donovan, who will retire from professional soccer at the end of the 2014 MLS season.

“As crazy as this sounds, some of the worst things that have happened in my life have turned out to be some of the best things. And I had an opportunity to grow a lot from what happened this year.

“And I wouldn’t have had that opportunity had I gone to the World Cup and played in the World Cup. I’ve grown a lot from it, and I think it’s probably shown in the way I’ve played.”

In 28 appearances this season, Donovan has netted 10 goals and provided a career-high 19 assists to become Major League Soccer’s all-time assist leader, adding that feat to his top scorer title.

Ashley Cole Out Of England’s World Cup Qualifier Against Montenegro