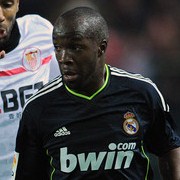 Transfer news from Spain is out nad it has been revealed that Real Madrid midfielder Lassana Diarra has turned down a move to Tottenham.

Spurs boss Harry Redknapp has admitted that he has been attempting to sign the France international this summer.

However Marca has revealed that the defensive midfielder has rejected an offer from Tottenham ahead of tonight’s transfer deadline.