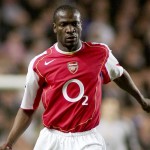 Reports are out claiming that Arsenal boss Arsene Wenger says Lauren was the best right-back in the world.

The former Cameroonian international was a key member of the Invincibles squad.

“He was, for me, one of the best full backs in the world,” the boss told Arsenal Player. “Not only because of his quality but he was a character, a real character. He was scared of nobody and when you needed the nerves you could count on Lauren.

“When he arrived here I had many discussions with him as I needed to convince him that he can become a right back and an outstanding right back. For a while, because he was a strong character, he didn’t accept it.

“Suddenly he understood that and I think that in Lauren and Ashley Cole, we had the best two full backs in the world.”