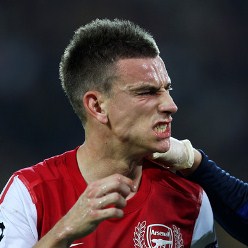 Arsenal defender Laurent Koscielny believes he has adapted to life in England a little less than 18 months after arriving from French club Lorient.

The 26-year old French international defender had his fair share of critics early on in his Gunners career but he has now turned the corner and is playing some brilliant football for the North Londoners which he puts down to adjusting to the competition.

“I think for a defender it is the best championship. I have had a bit of time now to be strong and get to know this league,” the Frenchman told the club’s official website.

“Now I feel good on and off the pitch and I try to put the effort into being a good defender.

“You don’t have to play differently here, you just have to work on the physical side. It’s very different to France or Spain and the strikers are very strong. I’ve worked a lot to do that.”

Guardiola : Barcelona Is Waiting For One More Signing – Cesc Fabregas!