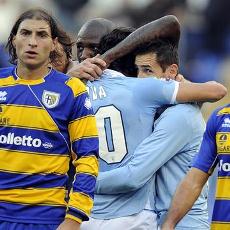 Miroslav Klose’s 10th goal of the Serie A season lifted Lazio into fourth place at the expense of Parma this afternoon.

Both sides went into the game chasing qualification for European competition and Giuseppe Biava’s early goal put the Biancocelesti on the path to a Champions League place.

Klose doubled the hosts’ advantage just before the break and Parma would end the day six points shy of contention for the Europa League, despite Ishak Belfodil halving the deficit by following up his own saved penalty.