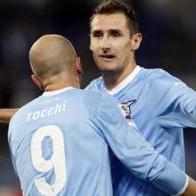 Stalwart striker Tommaso Rocchi scored twice to help Lazio to a 3-0 win over lowly Novara as his side kept in touch with the leading pack in Serie A.

Lazio, who had failed to find the target in their previous three matches in all competitions and managed only two goals in the two games before that, quickly forgot their scoring problems as they went 2-0 ahead in only 23 minutes.

Giuseppe Biavi headed the opener from a corner in the 16th minute and 34-year-old Rocchi, in his eighth season with the club, scored with another header from Cristian Ledesma’s free kick seven minutes later.