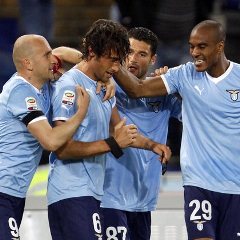 Lazio secured a vital win in their pursuit of Champions League football – beating fifth-placed Napoli 3-1 in an absorbing contest at the Stadio Olimpico.

The hosts took an early lead through Antonio Candreva’s strike that caught out Napoli goalkeeper Morgan De Sanctis, before Napoli levelled when Goran Pandev scored against his former club with an accomplished finish.

But the game will be remembered for Lazio’s second, an explosive bicycle kick by Stefano Mauri that will go down as one of the goals of the season.

Cristian Ledesma added a third from the penalty spot as Lazio tightened their grip on third place, leaving Napoli six points off third place in fifth.