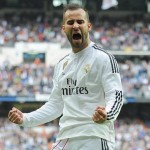 Reports are out claiming that Lazio are chasing Real Madrid striker Jese Rodriguez.

Tuttosport says Lazio are making a move for Jese, who is expected to demand a transfer at the end of this season.

The youngster is fed-up with the lack of first team chances he’s had since returning over Christmas from serious knee injury.

“I speak to Jesé the same as I do with everybody. I understand he wants to play more, but he has to be ready as his chance could come just as it has for Chicharito,” said Real coach Carlo Ancelotti.

“Jesé is staying because he is an important player.”