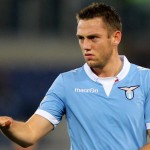 Reports are out claiming that Lazio defender Stefan de Vrij is being linked with Manchester United.

The Daily Mail reported that United chief scout Jim Lawlor was in the crowd to watch Lazio against Hellas Verona on Sunday.

Lazio’s highly regarded midfielder Felipe Anderson was understood to be the object of Lawlor’s attention while he also took the opportunity to check on centre-back De Vrij.